Doris Warmind [RKS013 Dreizehn] (ドリス・ヴァーミント, Dorisu Vaaminto; Japanese: Dolis Warmind, last name pronounced "Varmint") is one of the newest members of the RKS, who made her debut in Rosenkreuzstilette ~Freudenstachel~. She is a young yet very intelligent girl, despite having very little knowledge of the outside world. She is the leader of the RKS Special Ops division, as well as a subordinate and rival of Luste Teuber.

Doris has a ninja-esque design, as she wears a short lime green shirt showing her midriff with a wide seafoam green leafy collar that also covers her shoulders, a seafoam green trench skirt with a silver belt that she wears over her puffy white shorts, white thighhighs, and pink earmuffs which resemble headphones. She has long, lime green hair formed into twin tails with hair antennae and pale blue eyes, and carries an oversized pale green shuriken-like boomerang known as the Fesselspirale. In October 2009, she was given a slight redesign, as she is now shown wearing pale blue gloves and seafoam green boots, as well as an update to her thighhighs making them pale blue, as well as altering the appearance of her Fesselspirale.

As the head of RKS's Special Ops division, Doris is a hard worker that not only hates to lose, but also hates to be teased for her size. She is calm during battle and shows formidable power, but she can sometimes be careless and make mistakes at crucial times. She's very intelligent and educated but knows little about the real world and tends to come across as rude as well. She also becomes jealous easily. She idolizes Schirach Fühler, who crafted her Fesselspirale for her, and has a one-sided rivalry with her superior, Luste.

Doris holds the power of the "Shackle Vortex" Fesselspirale. Using it, she gathers wind power from the objects around her and uses it to throw her large shuriken-like boomerang, which arcs in a fashion normally impossible.

Doris was assigned to guard the Forest of God when she meets Freudia Neuwahl, who was apparently acting out of order. Although Freudia attempts to convince Doris that RKS members are allowed to act as they see fit when in urgency, Doris refutes this, calling the members of RKS "random and unorganized". She goes on to call Luste, who is her superior, an idiot; a claim that Freudia could not argue against. Finally, Strudel calling her small and cute sets Doris off and she attacks them.

After fighting, Doris claims that she only lost because she was not in the mood that day. She adds that she will eventually become like Schirach, who is her idol, although Freudia is obviously not fond of the idea. Strudel calling her small and cute again sets Doris off again.

Her weakness is Frostfackel, which is learned from Zorne Zeppelin. 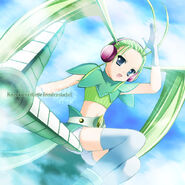 Artwork of Dolis Warmind in action by WOMI.

Doris' Twitter icon.
Add a photo to this gallery 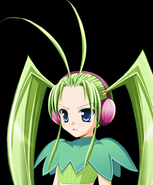 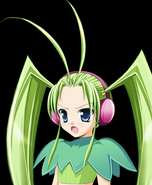 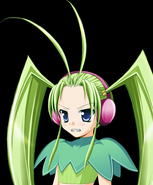 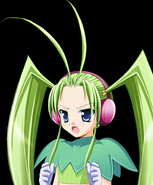 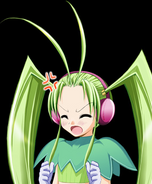 Angered
Add a photo to this gallery

Enemies and Bosses in the Rosenkreuzstilette series
Retrieved from "https://rks.fandom.com/wiki/Doris_Warmind?oldid=16924"
Community content is available under CC-BY-SA unless otherwise noted.