Due to her hypothermia, Eifer is dressed in a thick, heavy dark blue coat and hat with a pompom. She wears a gingham patterned scarf around her neck with pompoms on each end of her scarf and mittens on her hands. Her legs appear to be undressed, save for her feet which are dressed in blue shoes. Eifer has long, pale blonde hair and sky blue cat-like eyes.

Later, in Iris Stage 2, it is revealed that those hair and eye colors are fakes; her real hair color is white, and her real eye color is red. When she takes off her hat, she reveals herself to also have an ahoge in her hair.

Due to chronic hypothermia, Eifer is always wearing heavy clothes. Despite her young appearance, she is very cool-headed and mature. However, her emotions and mood violently fluctuate, resulting in her sometimes acting out of character and becoming a rage-obsessed monster under the wrong circumstances. She is sharp-tongued and seems to carry a deeply seated resentment towards Freudia.

Eifer possesses the miracle power known as "Fever Spike" Eiferstachel. Using it, she can manipulate the location, density, and hardness of objects around her and uses them to attack. She can turn earthly metals and flora into dangerous weapons in an instant.

Over the course of the story, Eifer is seen working with the Schwarzkreuz, acting as their ally. She, along with Schirach Fühler, play a role in kidnapping Spiritia in the beginning of the story. She later appears before Freudia and attacks her only to be defeated. Pamela Arwig then arrives and they exchange words with Freudia before leaving. Eifer is later encountered again by Freudia at the Phalanx Cathedral Ruins, where they battle only for her to be defeated again.

Eifer is later revealed to be one of the two main antagonists of ~Freudenstachel~. After all of the Dark Magi are defeated, when Pamela is about to force herself (severely weakened from her previous battle with Freudia) to battle again at the Schwarzkreuz Church, Eifer suddenly attacks and nearly kills her. She reveals herself to be working for Iris Zeppelin, who is the mastermind behind the Schwarzkreuz's scheme. Eifer also reveals that she assassinated the pope moments before. Freudia chases after the two after they leave, but not before talking Liebea Palesch into tending to Pamela's wounds. When Freudia encounters Eifer later in Iris's palace, Eifer reveals that she is a Homunculus created by "God", as she calls Iris, using Freudia as a base for the sake of "better rounding up the whole stage". She then transforms into the Darkside Devil. After her defeat, Eifer returns to normal to leave behind her last word, "Freudia", and then dissipates.

According to WOMI's recent diary response, Eifer actually died fighting Freudia. However, he also notes that there is a chance that she could be revived in a similar manner as Michael Zeppelin in future games.

After Pamela returns after defeating the RKS, the church has branded her a traitor, as informed to her by Lecht and Rink Refraktia. Pamela claims that there is a vilifier, whom she vows to slay. Eifer, when Pamela meets her again, is especially bitter in her remarks. Pamela defeats her and Eifer leaves behind the mysterious lines of "Ashes to ashes, dusts to dusts" before disappearing into the thin air.

After all of the Schwarzkreuz is defeated, when Pamela encounters Eifer at the Schwarzkreuz Church, Eifer reveals herself to have been working with Iris all along. She also reveals that the pope was murdered by her and replaced with a homunculus that had been posing as him since then. Pamela chases after Eifer and Iris, following them to the Iris Palace II. Pamela finds Freu being wounded by the Darkside Devil. Thinking that she had been sandwiched, Freu makes the judgment and leaves, leaving the now delirious devil to Pamela. After Pamela defeats the devil, she realizes that it was Eifer she had been fighting against. Pamela asks Eifer to join her in later days to form a truly honorable Schwarzkreuz, which Eifer responds with more acidity, calling Pamela an "abandoned piece". Pamela, not losing her poise, asks Eifer back that she isn't also an abandoned piece by Iris, which silences Eifer up before she leaves. Pamela lets out a breath for preaching so much in presumably the first time in her life and leaves.

After the defeat of Iris, Eifer, along with other Schwarzkreuz members, greets Pamela on her way back from her odyssey.

Eifer makes her first appearance at the end of Rosenkreuzstilette ~Freudenstachel's~ Opening Stage. She acts similarly to Freudia in Rosenkreuzstilette's Opening Stage; Eifer will release batches of leaves that spread out as they travel, which she does about 3 or 6 times. Staying close to Eifer and jumping over the swarm of leaves is the best method of avoiding her attacks. After releasing her leaves at the player, Eifer will disappear and reappear at a random location. She will sometimes reappear behind the player before attacking. Eifer will sometimes hover above the ground and create vine spikes that shoot up from the ground. These spikes can be avoided by sliding away from them. Eifer is rather easy in the Opening Stage.

In the more recent versions of ~Freudenstachel~, Eifer attacks differently; she will disappear and reappear on either side of the screen and fire green energy balls that cover the screen from there. These energy balls can be destroyed by Freudia's Freudenstachel. After firing her energy balls, she will levitate and summon vine spikes that pop out of the ground, two at a time. Two vine spikes will shoot up away from the player, then two more will shoot up closer to her, and finally, two will shoot up in an X-like fashion from below her, which she can slide away from to avoid. Again, just like in earlier versions, Eifer is a simple boss in the Opening Stage.

When the player fights her at the end of her respective stage, Eifer becomes significantly tougher than before. Eifer will teleport around the area, releasing a small energy ball that floats about before enlarging itself and splitting in two as they travel sideways across the screen. Eifer can also turn transparent and fly sideways above the player's level before turning solid again and firing her own version of Freu's Freudenstachel. If she reappears a little higher, she'll summon two vine spikes that will shoot up from the ground and then summon three more that'll shoot up from the ground below the player, with two of them doing so in an X-like fashion and connecting with the one in the middle that does so in a straight upward fashion, and then she'll repeat the same attack again. In Desperation Mode, after the first energy ball she fires splits into two large ones that travel sideways, she'll fire a second one that splits into two more that'll travel up and down. When she uses her variation of Freudenstachel, she'll create two copies of herself that will fire their "Freudenstachel" shots at the player, one at a time, before she and her copies disappear. The player can tell who the real Eifer is because her copies are transparent.

Her weakness is Schneekristal, which is learned from Schwer-Muta Casasola Merkle. 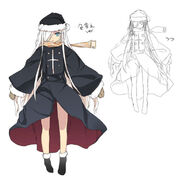 Eifer's design prior to the ~Freudenstachel~ site re-design, with the eyes and mouth at a different elevation.

Eifer's second redesign prior to the current one. 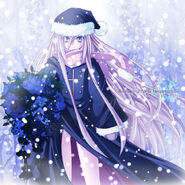 Artwork of Eifer by WOMI holding a bouquet of blue roses.

Updated version of the previous artwork.

Updated version of the previous artwork.
Add a photo to this gallery 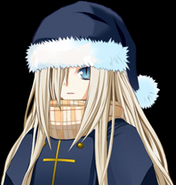 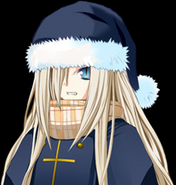 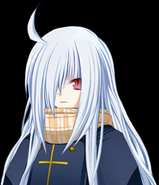 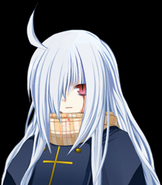 True form, wounded
Add a photo to this gallery

Enemies and Bosses in the Rosenkreuzstilette series
Retrieved from "https://rks.fandom.com/wiki/Eifer_Skute?oldid=16997"
Community content is available under CC-BY-SA unless otherwise noted.