In the Rosenkreuzstilette series, Liebea wears a long, lime green robe that covers up to the top of her chest, with detached sleeves that leave her shoulders bare, a pair of blue shoes, and several pieces of sapphire jewelry wrapped around her forehead and arms. She has long, messy pink hair and pale blue eyes.

In the cutscenes and ending of Freudia's story in Rosenkreuzstilette ~Freudenstachel~, her shoes are larger and recolored brown, and in the ending, her robe appears to be altered, with her detached sleeves leaving more of her upper arms bare as well as appearing to wear a green scarf.

Liebea is shown to have self-esteem issues, being a crybaby at the best of times. She also has trouble controlling her powers. Deep down, she is considered a lovable little sister with a polite and compassionate personality. She is also pacifistic, meaning she hates violence. She loves her brother very much, and she is willing to do anything for his sake. Liebea also loves flowers.

Liebea has the ability to manipulate weather. Her signature ability, Liebessturm, allows her to summon a downpour of rain. It takes a while to summon a storm, but the results can be devastating. Other forms of weather manipulation that Liebea has is the ability to summon powerful gusts of wind and tornadoes to push her foes away. Liebea, however, is not able to control her powers, so tries to avoid using her powers as much as possible.

Always willing to do anything for her brother Kahl's sake, Liebea attempted to stop the RKS's rebellion when Count Michael Zeppelin informed her that he was imprisoned by the Holy Empire, as she, like Spiritia, did not like the idea of going war against the Empire. This disappointed the RKS, yet they couldn't bring themselves to kill her, as they knew how pacifistic she was, so they instead locked her up at the top of the research tower. When Spiritia came to rescue her, Liebea couldn't come with her because she was worried about her brother, as Count Zeppelin said it was hopeless to pray for his safe return. Spiritia told her that Kahl was not a soldier and therefore the Empire shouldn't do anything to him. Liebea got upset over the thought that Spiritia chose the Empire over the RKS, though Spiritia tried to convince her that she was not siding with the Empire, However, despite Spiritia's efforts to calm her, Liebea lost control of her emotions, and thus her powers. Once her powers got out of control, Spiritia had no choice but to get her to come to by defeating her. Afterwards, Spiritia asked her if she had calmed down yet. Liebea asked for her forgiveness and pondered what she was doing. Tia forgave everything and understood how she felt. She was more than happy to help her make sure that Kahl was okay, much to Liebea's sad relief.

Liebea later returns at the end of Rosenkreuzstilette alongside the other members of RKS to welcome Spiritia back home on her triumphant return from her final fight against Iris Zeppelin at a floating island.

In Rosenkreuzstilette ~Grollschwert~, Grolla Seyfarth came to see Liebea, wondering if she was taking part in the RKS' rebellion as well. Liebea said she was against it, though she also said she had to do what she was doing. Grolla wondered if something happened, and Liebea explained that her brother Kahl was "captured by the Empire", as Count Zeppelin told her, and he said there was no hope for him. Grolla didn't know if he was dead or alive, though Liebea protests that she isn't as strong as Grolla and that her heart couldn't take the worry. It was then apparent that Liebea was losing control of her power, and from there, a fight ensued. After the fight, Grolla asked Liebea if she had calmed down, as she knew her powers weren't meant to be an outlet for her despair. She said she was going to go after Iris, and told Liebea to pull herself together in the meantime, and Liebea accepted, asking for her forgiveness in the process.

Liebea's common method of attack is chanting a few words to cast Liebessturm. If the player does not attack her before she successfully complete the chant, she will summon a rainstorm with Liebessturm and attack the player. Liebessturm is completely unavoidable. When Liebea takes damage from an attack, she will jump and attempt to cast Liebessturm again. She repeats this pattern throughout most of the fight. When she reaches Desperation Mode, every time she jump a gust of wind blows the player away as she jumps. From time to time, Liebea will fire three pink bullets in random directions. These can avoided by merely jumping over or sliding under them, depending where she aims her shots. On both sides of the area, there are two platforms that will slowly fall if the players is pushed the edge of the area. Should the player fail to get off the platforms before they sink into the ground, the player will fall into a bottomless pit and will be instantly killed.

Freudia runs into "Liebea" at a part of the White Desert . "Liebea" seems to be emotionless, prompting Freudia to notice that something about her is not quite right. Strudel, not quite realizing what was going on, is told by Freudia not to approach "Liebea"; Freudia claims this Liebea to be a fake and destroys it.

Strudel asks Freudia how she knew that Liebea was a fake, and Freudia notes that the variety of human emotions cannot be imitated by a Homonuclus, and also notes the fact that Liebea is someone who can't function normally without her brother being somewhere close. Strudel compares Liebea's and Kahl's relationship to that of Freudia and Spiritia, leaving Freudia in a state of embarrassment.

Later, the real Liebea arrives at the Schwarzkreuz Church where she finds Freudia with an injured Pamela Arwig after Eifer Skute had betrayed and wounded her. Freudia orders Liebea to tend to Pamela's wounds while she goes after Eifer and Iris. She finally reappears in the ending credits where she, along with the rest of RKS, happily reunite with Spiritia, Freudia, and their fairy partners.

In ~Weißsilber~, Pamela meets up with "Liebea" at the White Desert. Pamela is surprised when "Liebea" calls her Freudia as she greets her, and suspects that the real Liebea would not be out in the cold without her brother Kahl. Just like what happened in ~Freudenstachel~, Pamela confirms her suspicions when she discovers that "Liebea" is actually an emotionless fake version of herself before the fake explodes.

In the full version, Liebea attacks differently from her previous versions. Liebea will hop twice across the screen before doing one of three things:

1. She'll jump up and release several energy balls with Liebesfunke in eight directions twice before shooting a larger one that homes in on the player.

2. She'll fire three magnets with Liebesmagneto that come down on the players from above as soon as they are positioned above her.

3. She'll leap way up and all the way to the other side of the screen before conjuring a tornado within the center with Liebessturm and jumping upward as she does so.

During Desperation Mode, for Liebesmagneto, she'll fire the second magnet beneath her that can be jumped over once it comes at the player from the side. During Liebessturm, she'll summon two tornadoes either in the center or on the sides of the screen before she jumps up. When she uses Liebesfunke, she'll summon two copies of herself that'll fire their own two sets of energy balls in eight directions each before hurling their own larger energy balls in the player's direction. 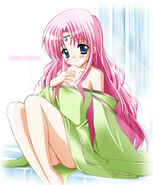 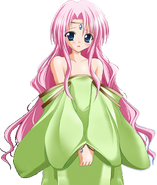 Liebea's ~Freudensatchel~ appearance prior to June 04, 2012, which depicts her with a worried expression, as opposed to the final's smiling.
Add a photo to this gallery 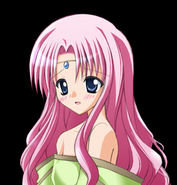 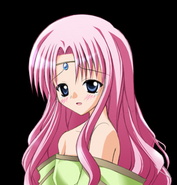 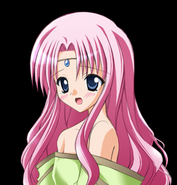 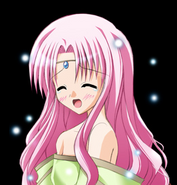 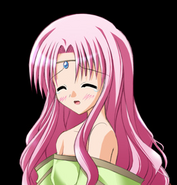 Loss
Add a photo to this gallery 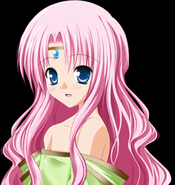 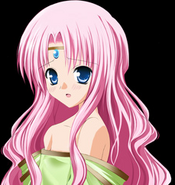 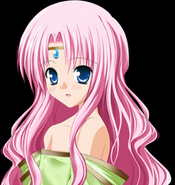 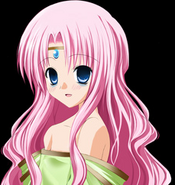 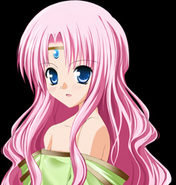 Serious.
Add a photo to this gallery

Enemies and Bosses in the Rosenkreuzstilette series
Retrieved from "https://rks.fandom.com/wiki/Liebea_Palesch?oldid=16869"
Community content is available under CC-BY-SA unless otherwise noted.