Luste Teuber [RKS005 Funf] (ルステ・トイバー, Rusute Toibaa; pronounced Lust Toi-ber), who refers to herself as Protogirl Bluste and is also referred to as "The Metal Hero" by her stage introduction in Rosenkreuzstilette ~Freudenstachel~ when donning her "Garb of Justice", is the fifth member of RKS. She is a cheerful, easygoing yet self-centered girl with deep admiration for Spiritia. She is also the superior of Doris Warmind, the leader of the RKS Special Ops division, despite the latter's one-sided rivalry with her.

Luste wears perhaps some of the most revealing clothes in the Rosenkreuzstilette franchise. In Rosenkreuzstilette, she wears a very revealing black bikini with a bronze cross and a red gem on it on the middle of her bra. She also wears long black gloves, stockings, a black collar, long oval-shaped rings around her wrists and white shoes. Luste has short, orange hair with two ahoges on the sides of her head, sage-green eyes, black cross earrings, and fangs. She also has small, floating bat-like wings.

In Rosenkreuzstilette ~Freudenstachel~, she wears a pair of orange goggles (which appear to have a red hue in the game), a slightly more revealing black bikini, metal knuckles, and slightly larger oval-like rings.

Luste is a cheerful, optimistic, and easygoing young girl who enjoys living in the present and believes that she is emotionally mature for her age. Her easygoing personality however makes her treat everything like a game. She also has a lot of admiration for Spiritia, thought when plays games with her, she makes Spiritia be the "bad guy". Luste cannot tell the difference between a game and real fight. She can also be self-centered and simple-minded at times. For an unknown reason, she enjoys drinking tomato juice.

When she dons her Metal Hero gear, Luste prefers to call herself Protogirl Bluste, the Metal Hero of Justice, and acts like an over-the-top superhero, refusing to use her real name while donning said gear.

Luste's ability, Lustatem, allows her to produce orange-colored pressurized blades of wind through the air. She can also change the blades trajectory and fire them in rapid succession. Luste is also capable of jumping higher than any normal human being, often to be believed that she is actually flying, possibly due to her small wings.

Luste was thrilled to meet up with Spiritia. Her main reason for the joining the RKS's rebellion against the Holy Empire was simply to be "the hero that will defeat the evil Empire", thought she admitted to having fun smashing several buildings. From there, Luste decided to play a "game" with Spiritia, and fought her. She lost and realized the difference between a game and a real fight, thought she still had fun "playing" with Spiritia. Luste then promised that she will never smash a single building again.

At the end of Rosenkreuzstilette, Luste awaited Spiritia's arrival along with the other members of the RKS on a floating island, and they happily reunited.

In Rosenkreuzstilette ~Grollschwert~, Luste wondered what was Grolla Seyfarth doing in her territory. She ordered Luste to stop what she doing, but she refused to listen and wanted to play more. Grolla called her an idiot and Luste remarked, "Ah! It takes one to know one!" and Grolla decided to discipline her. Luste lost and Grolla wanted her to leave and reflect on her actions. Luste began to cry a little, and Grolla figured that she hadn't disciplined her enough. Luste apologized for her actions and left.

Her weakness is Liebessturm, which can be obtained after defeating Liebea Palesch. Because Luste is based off of Metal Man, she also shares the same weakness; her own weapon, Lustatem. Because Lustatem can't be used during the initial first battle, as the player does not possess the weapon yet, the player will have to use Liebesstrum to deplete her health quickly. The only time this trick can be performed is when the player fights the Luste Homonculus in Iris Quarters.

Freudia investigates the reactivation of the sky fortress Sleipnir and finds Luste playing her "boring" games again. Freudia defeats Luste but Luste refuses to go to the aid of slowing the progress of the Church army, even though she was originally ordered/pleaded by Sichte to aid Grolla.

Freudia, having no other options, tells Luste that the "bad people" were coming to persecute the people in the land of the Graf and convinces Luste that it is more heroine-like to save those people when they need it the most. Luste leaves immediately afterwards/

Luste will jump around the room three to four times firing several Lustatem shots before flying high up towards the other side of the screen and firing several Lustatem arrows in eight directions. When she lands, she will pose, create a wind that drags the player towards her, and fire a large Lustatem shot at the player in a direction dependent on where the player is positioned. From that point until her HP is at half health, she'll repeat the same process. Once she goes into Desperation Mode, the floor will disappear off the screen and be replaced by several rising platforms, with the main one in the center not moving as Luste flies high upward. When she comes down, she will fire several Lustatem arrows in several directions either below her, above her, or to several sides of her, and she'll do it at least twice before flying back up and coming back down from in another spot from the top of the screen.

Luste is weak against Eisschwert, which is learned from Grolla.

Artwork by WOMI of Luste and Spiritia wearing simliar bikinis, which happen to be gifts from Trauare. 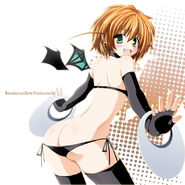 Artwork by WOMI of Luste from the back view and looking back.

Luste dressing up as Proto Man on the [erka:es] April Fools site. 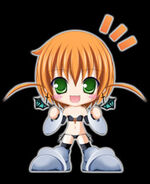 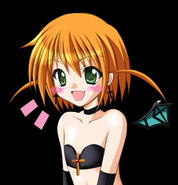 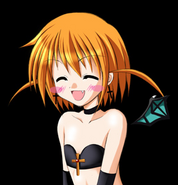 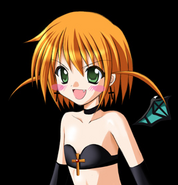 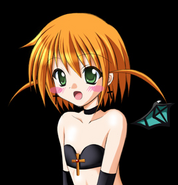 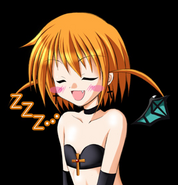 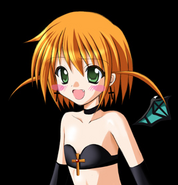 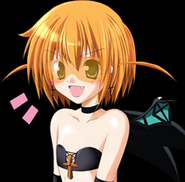 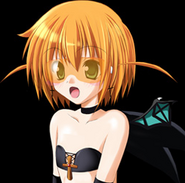 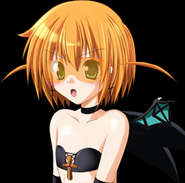 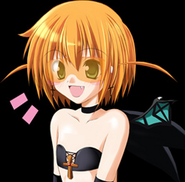 Enemies and Bosses in the Rosenkreuzstilette series
Community content is available under CC-BY-SA unless otherwise noted.