A girl born of nobility, Pamela was secretly trained as a royal magic knight and is the captain of the Schwarzkreuz organization who reports directly to the Holy Empire's Pope. Her existence is kept a secret, and because of that, very little is actually known about her. As a result of her noble upbringing, she's a very straightforward and sensible person, but tends to be considered haughty and sanctimonius. She never doubts her views of justice and will convict those who do not share them. She does not believe herself to be a Magus, instead insisting that her abilities are miracles granted to her by God. Pamela makes her home in Burkhardt Castle.

Pamela wields the "Whitesilver" Weißsilber, a magical sword. Using it, she can draw a magic circle in the air and manipulate the space within it. As a result, many attacks are available for her use.

Pamela first appears before Freudia Neuwahl after she defeats Eifer Skute for the first time. Pamela introduces the Schwarzkreuz as an organization of justice and demands Freudia and the RKS's surrender. Upon hearing Freudia's refusal, she leaves in disgust. Later on, after Freudia defeated her comrades in the RKS, Pamela and the rest of the Schwarzkreuz spy on Freudia with their viewing globe at the Schwarzkreuz Church. While Schirach and Eifer argue over who should have the "fun match", Pamela tells the two that it doesn't matter who goes since Freudia is not going to be a match against either.

When Freudia shows up at Burkhardt Castle, Pamela appears before Freudia, ready to fight. When Freudia comments on Pamela's magic, Pamela is offended that Freudia sees her as another "witch" like the RKS. Pamela claims that her power is a "miracle" granted by God, not "magic", and that she is convinced that she and the Schwarzkreuz are destined to eradicate the "evil" RKS. After a battle with Freudia, Pamela is defeated. Not expecting to suffer such a disgrace, Pamela leaves, red in the face and eyes.

After all of the Schwarzkreuz are defeated, Pamela approaches Freudia at the Schwarzkreuz Church. Weakened by the previous battles, Freudia was in no mood to battle her, though Pamela refuses to let Freudia get away with harming her pride. Before they can fight, Eifer attacks and nearly kills Pamela. Freudia convinces Liebea Palesch, who came by with the RKS to free the persecuted, to take care of Pamela, noting to Liebea that she is a magi like the rest of them.

Pamela Arwig, the captain of the Schwarzkreuz, decides that it would be more time-efficient for her to defeat the RKS herself in terms of putting down the Walpurgisnacht. Pamela, on her way to Zuverberg, meets Freudia at Count Michael Zeppelin's Castle Grounds and demands for RKS to resign. Freudia refuses, Pamela fights her and wins. Freudia escapes.

Pamela then begins to fight her way through the rest of RKS one by one. However, as she fights alone, her determination wanes as she sees what she didn't expect in RKS, such as the friendship between Zorne Zeppelin and Trauare Wrede, the weirdness, yet lack of malice of Schwer-Muta Casasola Merkle, and the comraderie between the RKS members and their captain, Sichte Meister.

On Pamela's victorious way back to the church, the Refraktia sisters show up and inform Pamela that she has been branded a traitor and heretic by the Pope and is ordered to leave at once. Believing that she has been vilified, Pamela vows to find and slay her vilifier.

As she searches for the person who smeared her name, Pamela began to enter battle with the remaining Schwarzkreuz members. Pamela is surprised that the Schwarzkreuz members could bring themselves fight her, provided that they were comrades just a few days ago. She is also told by Schirach that there was no such a thing as "morale" in Schwarzkreuz; the members each had their own secrets and goals that deviate from the holy image of Schwarzkreuz that Pamela had in mind, unbeknownst to Pamela. Pamela nevertheless defeats all the members of the Schwarzkreuz and asks them to join her in later days to reorganize an honorable Schwarzkreuz. After the fights, Eifer revealed that the real Pope was dead all along and that he was replaced by a homonculus posing as him. Iris then revealed herself before Pamela and revealed that she was the one manipulating everything. Eifer, showing herself alongside Iris, had a bitter time arguing with Pamela that she is not "just a miserable puppet" before leaving with Iris.

Pamela, seeking to regain her honor, pursues Iris and charges into the Iris Palace II. Mid-way, she encounters Freudia, this time badly wounded by the Dark Devil. Pamela realizes that the monster is indeed Eifer herself and frees her before Eifer attempts to kill herself by overusing her magic. Pamela, like she did with the other Schwarzkreuz member, offered Eifer to join her one day in the formation of a truly honorable Schwarzkreuz, even though both of them are indeed fooled and used by Iris. Eifer left without an answer.

Deeper into the Palace, Pamela meets Iris and destroys her machine, forcing Iris into the final arena. There, Pamela meets the brainwashed Spiritia and frees her from Iris control before defeating Iris. Although wondering why her sword even worked on Iris, Pamela defeats and kills her.

Freudia comes and meets Pamela and thanks Pamela for saving Spiritia. Pamela warns Freudia that she still would not acknowledge RKS and that if they start another rebellion, she would go about bringing their downfall. Freudia then leaves, taking Spiritia back home with her. Pamela finally relaxes herself and returned to the place where all members of Schwarzkreuz, Eifer included, waited.

Pamela will create two magic circles and then disappear off the one in front of her before reappearing off the other magic circle, leaping forward and slashing with her sword before she lands. She'll fire two magic circles, one along the ground and one diagnally above the air, before hurling a fireball at Freu, as the two magic circles she fired home in on Freu herself. Pamela can also fire several energy swords at Freu in different directions, which Freu can avoid by jumping over them. Pamela may occasionally set herself ablaze and dash at Freu in a fireball-like state and may also leap up and then fire more sword beams from beneath herself, before creating two more magic circles and disappearing off the one closest to her and reappearing out of the other one. During Desperation Mode, while firing her homing magic circles, instead of hurling a fireball, she'll enlarge her Weißsilber and raise it high above her head, and upon swinging it, she'll release a large slash effect that travels across the screen. There is a small safe spot in the front of Pamela herself to avoid the large slash effect attack. And the flame dash attack would be used twice each time during Desperation Mode.

Her weakness is Weißteufel, which is learned from Sichte Meister. Although it doesn't slow her down, the daggers fired with Weißteufel still do significant damage to her. 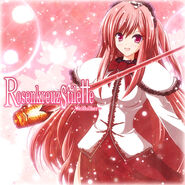 Pamela on the promotion picture for Weißsilber.

Pamela's Twitter icon from the Rosenkreuzstilette Lustatem April Fool's site.
Add a photo to this gallery 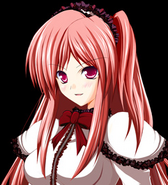 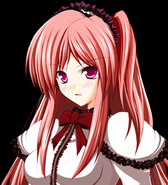 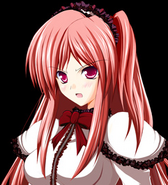 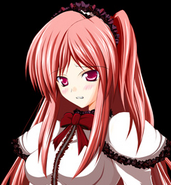 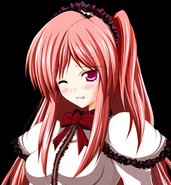 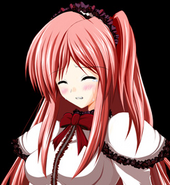 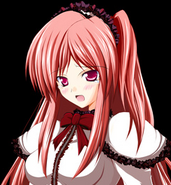 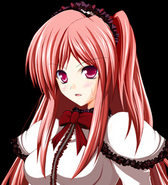 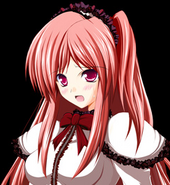 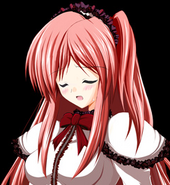 Sighing
Add a photo to this gallery

Enemies and Bosses in the Rosenkreuzstilette series
Retrieved from "https://rks.fandom.com/wiki/Pamela_Arwig?oldid=16854"
Community content is available under CC-BY-SA unless otherwise noted.