Sichte Meister [RKS007 Sieben] (ズィヒテ・マイスター, Zihite Maisutaa; pronounced Seek-tuh) is the seventh member of RKS as well as its active leader and commander. She is also a close friend of Grolla Seyfarth who happens to be her subordinate, referring to her as Lady Sichte (ズィヒテ殿, Sichte-dono). The other Magi in RKS also respect her as their superior. As of Rosenkreuzstilette ~Freudenstachel~, Sichte is one of the few who aim to inherit the will of the late Michael Zeppelin alongside Kahl Palesch.

Sichte is a very well-endowed woman with tan skin and short, hunter green hair, and dark yellow eyes. In Rosenkreuzstilette, her outfit consists of a white tube-top shirt with sleeves that hangs around her shoulders, as well as black leather shorts, a blue trench skirt and white boots with crosses on the toes. She also wears gold rings around her wrists and a necklace with a cross around her neck.

In Rosenkreuzstilette ~Freudenstachel~, Sichte's shirt and shorts are torn apart, revealing more of her skin, along with a dark blue trench skirt and wider, yet dull-colored gold rings around her wrists. She also wears black underwear under her shirt and has small belts around her arms and one of her legs. She also rids herself of the cross necklace from the previous game. In the ending for Freudia's story, her shirt is shown to have been replaced, although her shorts are still torn.

"Your future has already been decided. I am merely clearing the way for you."
—Sichte Meister, Rosenkreuzstilette

Being the active leader of the RKS strike force, Sichte is a level-headed decision-maker with keen judgment who values honor above all else. Being born and raised in the slums, Sichte has had a troubled childhood. As a result, she finds it difficult to have faith in adults. While Sichte is pardonless in the face of her enemies, she is in fact kind and caring. Sichte dreams of a utopia where people with magic powers wouldn't be persecuted.

Sichte's ability, Die geplante Zukunft, allows her to manipulate time; she can either speed up, or slow down time, or halt it altogether. She can also release emerald shards from her knife and manifest knives out of nowhere.

Sichte's sole reason in joining Freudia and the other members of RKS was to realize her dream of human and Magi co-existing peacefully.

Even though times may have changed, injustice has always been a part of the world, which Sichte claims to be what people fight against. After being amused by Lilli's attitude, Sichte told Spiritia that they are fighting for a place where they belonged and that there was no shame in what they were trying to accomplish. She questioned Spiritia on if humans deserve the right to live for what they did to Magi. Knowing that they were not coming to agreement, Sichte decided to test Spiritia's strength to see who was right. Sichte was defeated, realizimg how strong Spiritia was. Grolla arrives shortly after and comes to Sichte's aid. Grolla vowed to punish Spiritia for defeating Sichte and the two left the area.

After Grolla's defeat, Sichte arrives to her aid. She ordered Grolla to stand down and prayed for Spiritia's success.

After Spiritia defeated Grolla, Sichte immediately comes to her aid. Sichte could no longer tolerate Spiritia getting in the way of RKS's rebellion against the Empire and was willing to deal with her personally. When Spiritia arrived to confront her, Sicthe told her that they were making a utopia for humans and Magi. Being unable to convince Spiritia to cease her actions against the rebellion, Sichte was intent on killing her.

After being defeated, Sichte realized how strong Spiritia had become. Grolla then appeared before Sichte and came to her aid. Sichte ordered her to stand down, as the victory was Spiritia's. She then prayed for Spiritia's success. Grolla accepted that they have both defeated by Spiritia, though she was not willing to accept her being defeat by another.

In the end of Rosenkreuzstilette, Sichte awaited for Spiritia's arrival along with the other members of the RKS on a floating island.

In Rosenkreuzstilette ~Grollschwert~, Sichte overheard Iris' cry for help and became a witness to Grolla's "attempt" to kill her. Despite not knowing the full details of the situation, she ordered Grolla to sheathe her weapon before things got out of hand. Grolla instead escaped, leaving Sichte to worry about her. She then came to Iris' aid and asked her why Grolla attacked her. Iris pretended to be too afraid to even answer her questions, so Sichte decided not to question her in the condition that Iris was in. Iris gave a short laugh short that caused Sichte to become suspicious of her, though she was still unaware of what had actually happened.

Grolla confronted Sichte in Zuverburg. As the leader of the RKS strike force, Sichte always keeps a look out for those who do not follow their orders, though she never expected Grolla to one of them. Grolla was willing to accept being branded as a traitor and paying the price, though she could not relent during her pursuit of Iris. Sichte grew wary of Grolla's talk of Iris, though she was not going to call Grolla a liar and stated that their ideals did not involve Iris. Grolla then warned her if things continue as they are, she cannot tell what will happen. Sichte understood that the sword Grolla carries was once used by her grandfather and mentor, Raimund Seyfarth. Grolla also told her it was also her grandfather's memento. At that moment, Sichte dueled against Grolla.

After being defeated, Sichte was surprised by how merciful Grolla was. Sichte said to Grolla she would have preferred to be slain by her Grollschwert instead of having the feeling of disappointment from those who does not fight with all their heart. Grolla told her that being dead would not be useful to anyone and she wanted Sichte to stand by her side against Iris. Sichte could not turn her back on her cause even after her defeat, though she promised Grolla that she will no longer stand in her way. If that was not acceptable, then she was willing to be struck down by Grolla's blade. After a moment's silence, Grolla bids her farewells to Sichte and continued her pursuit of Iris.

Sichte begins the battle by shoot emerald shards at the player at random directions, this can be easily avoided by keeping a safe distance from her and jump to avoid the ones that needs to jumped over. After she finishes firing shards at the player, she will do one of the following, depending how if the player is close or far away from Sichte: she will simply walks towards the player into crushing into them; or if the player is far away from her, she will use Die geplante Zukunft as she jumps over to the other side of the area, then walk into them after time resumes. During Desperation Mode, she will fire twice the amount of shards from her knife and she will always use Die geplante Zukunft as she jumps. As she jumps however, she will place knives while she jumps to the other side. When time resumes, the knives she has placed will home in on the player. To avoid this, slide under the knives before they can zero-in on the player.

Sichte is weak against Grollschwert, which is obtained by Grolla.

Sichte greets Freudia at the top of the Zuverburg Clock Tower, saying that the night is filled with familiar faces. Freudia then learns that Sichte has fought several homunculi of the RKS members earlier that night.

Sichte could not allow herself to let Freudia pass as long as there is a chance of her being another fake and attacks her, but assures her that she will be gentle when the latter voices that she would not stand a chance against the former. After being defeated, Sichte is convinced that Freudia is not a fake and learns that Spiritia has been abducted. Sichte pleads for Freudia to bring Spiritia back and, in the solemn atmosphere, asks Freudia a question.

As Freudia gets serious, Sichte shows Strudel happily rubbing her breasts and asks whether she is a friend of Freudia before leaving.

Sichte will throw four knives into the air and fire two emerald shards from her knife that will slow down upon their release, then zero-in on the player as the knives she threw fall above the player. During Desperation Mode, Sichte will throw more knives into the air and fire three emerald shards instead. She will sometimes jump into the air and either slow down or speed up time, varying on the Roman numeral that lights up on the clock tower. While time slows down or speeds up, the X number of knives will fall from above based which Roman numeral lights up (i.e. I = 1 knife; II = 2 knifes; III = 3 knifes and so forth). If an odd number is lit, a knife will be assured to fall above Freudia with two opening around the sides; if an even number is lit, the knives will split up to anticipate the player's movement away from the opening spot in the center.

Her attack pattern is different in the more recent versions of ~Freudenstachel~; she'll start out by firing several emerald shards from her knife that, like in earlier versions, slow down upon release and then zero-in on the player, and then leap into the air and release several more shards from there that also slow down upon release and then zero-in on the player. She'll then turn transparent and quickly walk around to choose one side of the screen (that while not actually harming the player while she's transparent), and after turning back to normal upon choosing a side of the screen, and then walk with her knife held out as some more knives are hurled at the player in three sets of three. After that, she'll leap into the air and throw several more knives into the air as she does so, and when she lands, the knives she threw into the air will rain down on the player's head. After that, she'll repeat the same process. During Desperation Mode, she gains a new attack where she stops time, jumps into the air, lights up all of the Roman numerals, and comes back down on the player with a giant block as time is resumed, which the player must slide away from to avoid. This attack is used after her emerald shard attacks and before her knife attacks during her new Desperation Mode attack pattern. 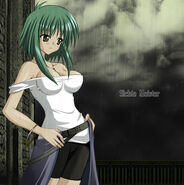 Official artwork by WOMI of Sichte in The Fortress City of Zuverburg.

Sichte's ~Freudenstachel~ appearance prior to September 05, 2011.
Add a photo to this gallery 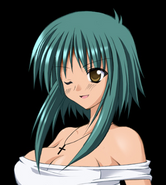 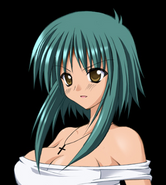 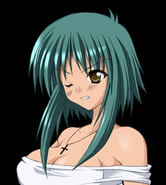 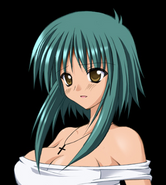 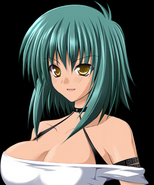 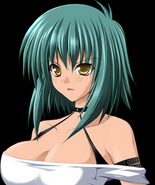 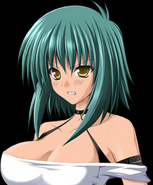 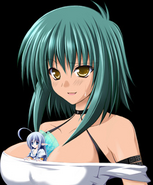 Embarrassed as Ruu fits herself between her breasts.
Add a photo to this gallery

Enemies and Bosses in the Rosenkreuzstilette series
Retrieved from "https://rks.fandom.com/wiki/Sichte_Meister?oldid=16863"
Community content is available under CC-BY-SA unless otherwise noted.