Strudel (シュトルーデル, Shutoruuderu), known as Ru (ル, Ru) for short, is a fairy in the Rosenkreuzstilette series, first appearing in Rosenkreuzstilette ~Freudenstachel~. Her role is similar to that of a fellow fairy, Lilli, in the original Rosenkreuzstilette, and she assists Freudia Neuwahl as her fairy partner as she gets to the bottom of the mysteries of the Schwarzkreuz and their hidden agenda.

Strudel is more clothed than Lilli; she wears a light blue, short-sleeved cloak with yellow linings and yellow bands of the sleeves of her cloak with skull-shaped belt around her waist and white boots. Strudel has long, light blue hair with braids on the sides of her face held by blue beads, a blue band with a dark blue cross around the end of her hair and an ahoge. She also has light blue wings and blue eyes.

When Strudel shows her true form, her hair turns white and her eyes turn red, just like her partner Freudia, which signifies her role as one of her replicas. Her hair and eye colors immediately return to normal after the defeat of the Darkside Devil.

"Are you kind to have smooth bumps on your head?"
—Strudel, Rosenkreuzstilette ~Freudenstachel~

A fairy who didn't quite fit in with the rest of the forest inhabitants, Strudel is caring, carefree and perpetually optimistic and knows nothing of hatred. All she sees is what pleases her. She's the type who lazes about and has no general goal but shows no resentment to work that needs to be done. Thus, she willingly pursues her goals with an unstoppable zeal when she has a goal to chase and is not being lazy. Strangely enough, she likes to rub round and smooth objects, such as what she refers to Sichte Meister's breasts as, for example (much to her embarrassment).

Strudel can create ice sculptures through Freudia's usage of Strudels Hund and Strudels Flügel that help Freudia herself get to places that are usually impossible for her to reach. They are acquired from Schwer-Muta Casasola Merkle and Luste Teuber respectively.

In addition, like Lilli before her, she can also use the Black Forest's treasure to attack enemies directly after finding it in Liebea Palesch's stage.

Strudel first meets Freudia within the hallways of the Castle Grounds. Strudel stops Freudia in her way to ask her whether she likes round objects and Freudia decides that she has no time to deal with Strudel and leaves her. After fighting with Eifer and refuting Pamela's demand for surrender of the RKS, Freudia reasoned that it is very likely that Spiritia Rosenberg has been abducted to the church, which is the base of the Schwarzkreuz. Strudel shows up once again to talk to Freudia, saying that she is very fond of Freudia's "shining" snow magic. Freudia reveals that she was the witch who burned the Forest of Darkness where all fairies lived but Strudel doesn't know what forest Freudia was talking about. Despite Freudia's refusal to bring Strudel in her quest, Strudel decides that she will "follow anyway" and Freudia gives in.

Strudel makes several comments about different things as Freudia fights her friends at the RKS on her way to the church. If Freudia should find the Black Forest's Treasure within Liebea Palesch's stage, the White Desert, Strudel will recognize it as the treasure of the forest and decide to borrow some of its power to help Freudia in her travels. Strudel said that there are 77 of such treasures hidden throughout the land and reveals that the actual number is 78, implying that the one Freudia just found will not be returned, at least before the end of the quest.

Later, while Freudia is going after Iris Zeppelin, she encounters Eifer again who was revealed to be a Homunculus based on Freudia by Strudel. Eifer in turn reveals that Strudel doesn't have complete memories when she was created; the Freudia-based cloning was separated in two separate beings resulting in Strudel's incomplete memory; "one is a human who doesn't understand happiness and joy, one is a fairy who doesn't know anger and sadness". It is here where Strudel reveals her true form. She reverts back to her normal colors after Freudia defeats the Darkside Devil and reverts it back to Eifer.

Strudel supports Freudia in her final battle against a brainwashed Spiritia and her controller Iris. After Freudia frees Spiritia and seals Iris away, the three arrive at the Snowy Pillars where Spiritia thanks Freudia and Strudel for saving her. Lilli arrives and finally finds Spiritia, not knowing that enemies had already been defeated. A short moment of awkwardness follows between Lilli and Freudia before Strudel cuts in, since she had never met any fairies. Strudel, realizing that her appearance doesn't fit in the species of Forest Fairies, introduces herself as a Snow Fairy to Lilli and befriends her. Spiritia, Freudia, Lilli, and Strudel then return home and happily reunite with the others at the RKS.

Strudel has a small role in Rosenkreuzstilette ~Weißsilber~. Pamela encounters Freudia and Strudel at the Bloody Ruins at the Iris Palace II, and both are having trouble with the Darkside Devil. Pamela tells Freudia and Strudel to leave the monster to her, and defeats it, revealing it to be Eifer. Later, after Pamela frees Spritia and destroys Iris, she reunites Spiritia with both Freudia and Strudel, and they both thank her for saving Spiritia before taking her back home with them.

Strudel's design prior to November 27, 2011, which used a different pose than her final profile artwork. 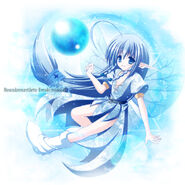 Strudel With Freudia Neuwahl on the promo picture for RKSF.

Strudel Twitter icon.
Add a photo to this gallery 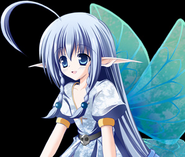 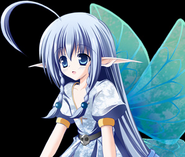 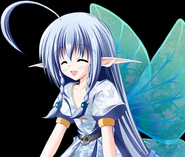 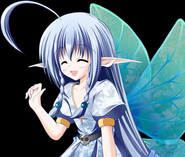 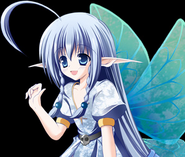 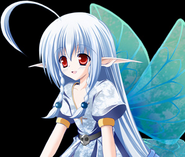 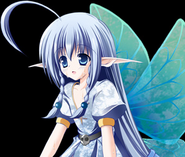 Melt
Add a photo to this gallery

Weapons and Abilities in the Rosenkreuzstilette series
Retrieved from "https://rks.fandom.com/wiki/Strudel?oldid=16929"
Community content is available under CC-BY-SA unless otherwise noted.